The Powerful story of FEWOCiOUS

Victor Langlois, popularly known as Fewocious, is the person who followed his passion. He is leading the NFT (non-fungible token) artwork mining technology on the Ethereum blockchain cryptocurrency platform. He is one of the most successful members of a growing community of queer crypto artists who are finding success in the modern gold rush that is the NFT market. 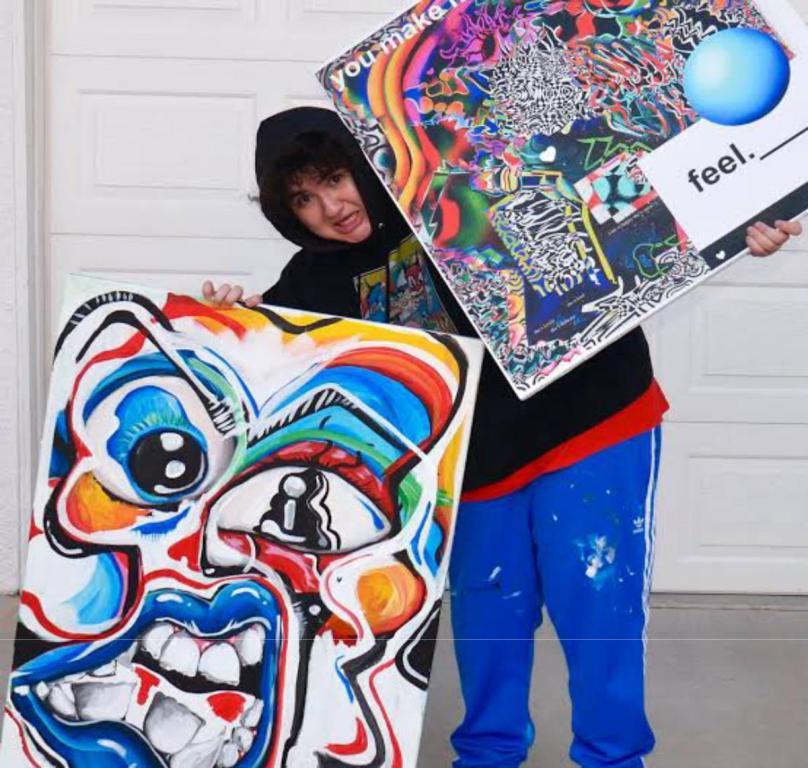 The queer artist grew up in the home of an abusive father and after that unsupportive grandparent before leaving at the age of 18 ans was originally known as Victoria.

Social services eventually removed him from his father’s care. He then lived in Las Vegas with his grandparents until he was 18. Growing up with his grandparents was equally challenging as his grandparents were conservative Christians who considered that a person’s gender was decided at birth. He was rarely allowed to leave his room and had no access to the internet. This is ultimately how he became interested in art because he needed a diversion. Victor learned joy and a way to describe himself through the art he made. He discovered the world of digital art on Twitter, as well as an online trans community, after finally obtaining a cell phone, which gave him hope for the future. Things were also difficult away from home. “Being at school, you see all the tall, handsome, cis boys, and all the girls are like, ‘Ah, look at him,” says Langlois. “And it’s like, ‘Wow, I’m here. And no one wants to talk to me or even knows that I’m Victor.’ Langlois said he focused on painting with his head down to get through the terrible, never ending days of high school.

Over a 24-hour period, a total of 5,000 shoppers purchased FEWOCiOUS’ signature style digital paintings that look like small blobs of bright colors.

It was through his artwork that Langlois came out of the closet. “I began questioning my gender identity when I was 14 years old,” the artist explained. I wished I could wear whatever clothes I wanted. I wished my mother would let me cut my hair however I pleased. My mother told me that the way I think is wrong. My mother warned me that if I cut my hair, she would never want to see me again. My mother told me that people like me are disgusting and do not belong. My mother mentioned that if I presented myself in this way, she would not want me in the house. He booked a one-way ticket to Seattle two days after turning 18, after saving as much money as he could, to focus on art full-time.

Till date FEWOCiOUS has created many artworks which include : 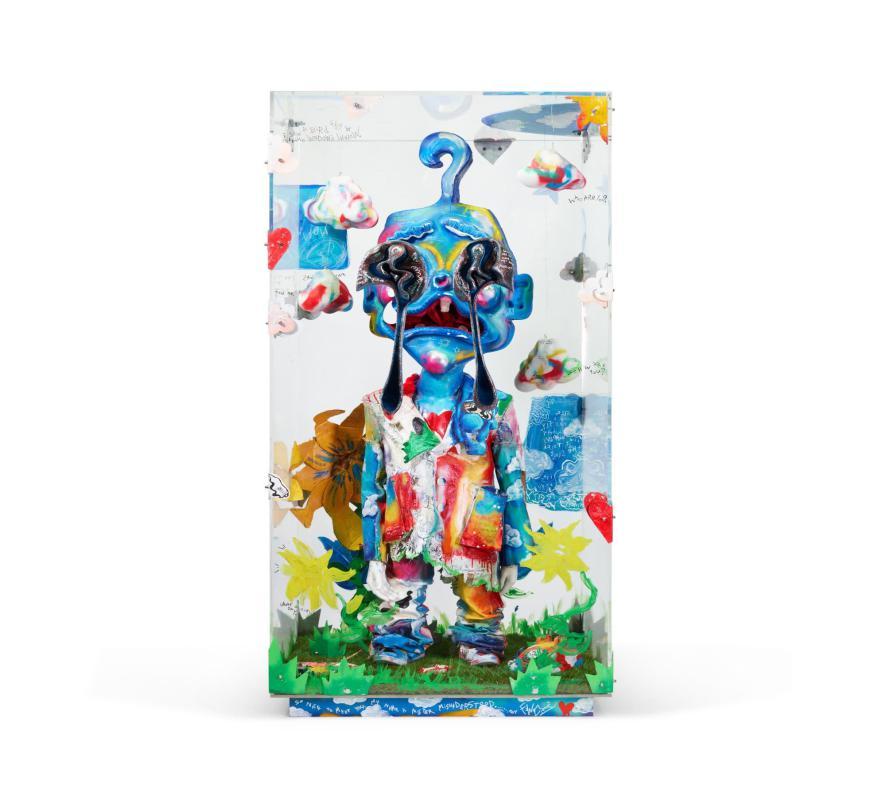 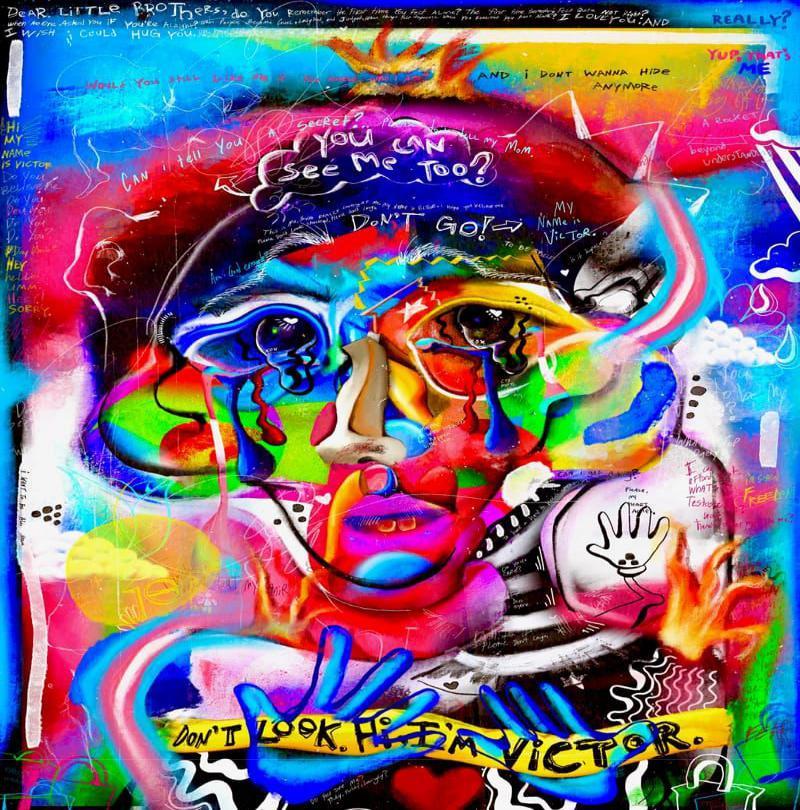 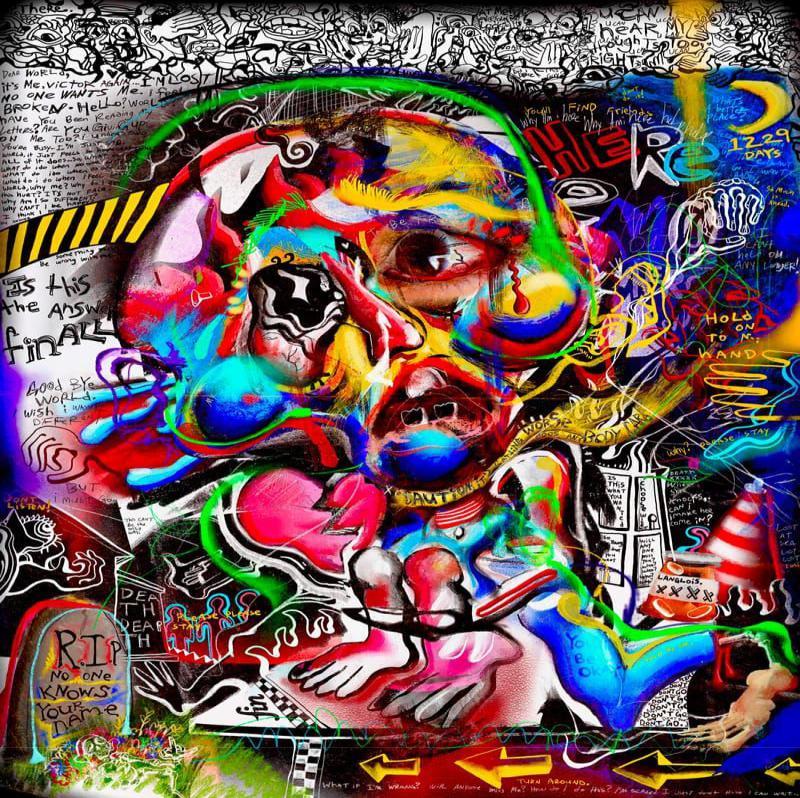 Langlois was fortunate to have his work sold at auction at Christie’s in June 2021.The piece is titled “Hello, I’m Victor (FEWOCiOUS), and This Is My Life.”

On June 23, 2021, at approximately 10:00 a.m. EST, the website for Christie’s, the legendary auction house, crashed, which was never seen before. Buyers from everywhere crowded the site hoping to put their bids on a series of NFTs by FEWOCiOUS. The auction was postponed for the next two days. One may say that his art actually broke the system. The piece was eventually purchased for $2.16 million. Langlois is not only the youngest artist ever featured by Christie’s, but he is also the single most artist to have crashed their site. Fewocious had no basic understanding of the crypto world. He always assumed it was a scam and didn’t believe it at all. He actually started his digital art career in high school with a self-purchased iPad and an old laptop provided to him by his grandparents. At this point, a buyer contacted Victor months after purchasing a $95 painting and introduced him to the world of blockchain cryptocurrency and NFTs.

At the age of 19, Victor Langlois is widely regarded as one of the most prominent NFT artists of all time. He invited collectors to buy as many digital paintings as they wanted during the 24-hour event, approximately about $20 million in NFTs. This is Nifty Gateway’s third highest-ever sale. FEWOCiOUS, collaborated with RTFKT Studios to create NFTs with a physical redeemable component. Three styles of sneakers, as well as a ‘Charm’ and a ‘Drip,’ were created for the open edition sale, which saw a turnover of over US $3.1 million in 7 minutes. The virtual sneakers and collectibles were created by a digital artist and sold 608 pairs. The ‘Charm’ item is a necklace that sold for $88,880, while the ‘Drip’ item sold for 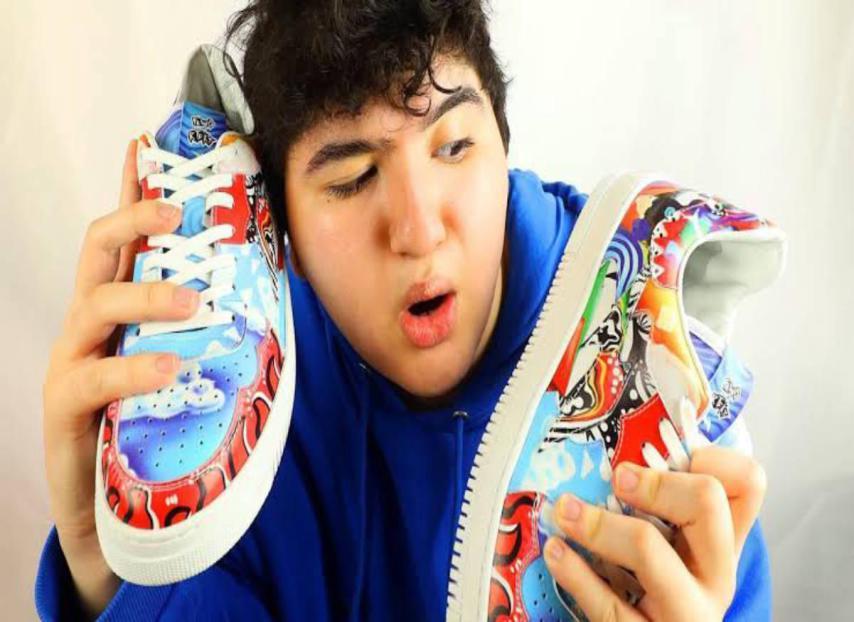 SuperRare is another popular NFT platform. It promotes digital art because it is a marketplace for buying and selling a variety of artworks. He made around 5 ether ($7,320) per sale on average. “I Feel So Lost” was one of the first pieces of art by FEWOCiOUS to be sold on SuperRare. SuperRare has forced him to make a lot of money in a short period of time, which is a significant accomplishment.

Langlois to this day lives in Seattle in his own home, where he is able to enjoy his freedom, create the art he desires, and inspire others who may be in similar difficult situations.Yet he never settles for less and considers that there is much more to learn and accomplish. He is an inspiration and emerging idol for the queer community.

10 Most Famous and Expensive NFTs Sold and...

No comments to show.