Bitcoin has gained a lot of popularity since it has been launched. Certain terms like NGMI acronym and HODL acronym are commonly used by crypto traders to communicate amongst each other. 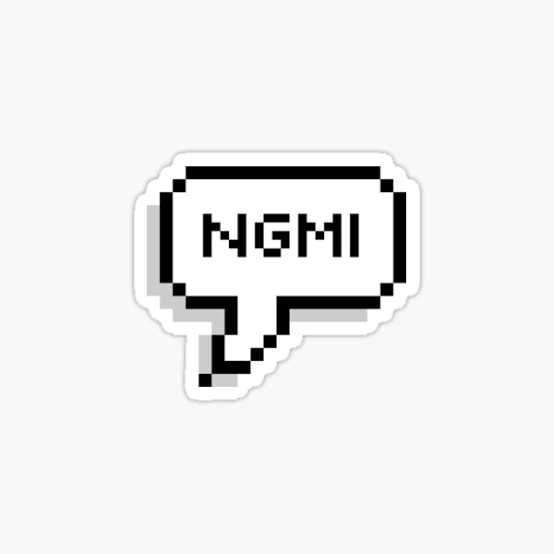 A person should understand certain crypto words to boost their knowledge and success in the space. NGMI acronym in crypto stands for “Not Going To Make It.” NGMI is basically used to press the point that a crypto trader can could miss a huge profit on a particular trade. For beginners, knowing the crypto lingo can help them understand the condition of the market quickly, because by knowing the losses, you can start to align your trades perfectly.

NGMI acronym is one of the various terms the crypto traders use on social media or real life. It represents a scenario in which an investor disregards professional counsel and market facts and makes a poor choice. The phrase has a decidedly unfavourable connotation, suggesting a poor choice. People who don’t understand the benefit in investing in things like cryptocurrencies and NFTs are referred to as having NGMI by members of the crypto community. They think that by not making an investment in these things, they are making a bad financial choice that will have no positive consequences.

Some of the other most commonly used words in the crypto space are as follows:-

WAGMI stands for “we’re all going to make it”. When the people in the NFT and Crypto hear positive news that may increase the value of an asset, they use this term. It is the idea that there is enough success for everyone here and everyone is going to succeed. It can also be used as a reminder to not to sell when there is negative news.

Diamond Hands is a slang term for an investor who has a high risk tolerance for high volatility stocks or assets that they own. They don’t cave under pressure and sell their stocks. A Person who has diamond hands would not sell and continue to hold on to their assets even during long downturns or losses and will only sell it once it has reached the desired price or target.

An airdrop is a very common word used in crypto and NFT space which refers to the distribution of NFT or tokens for free to numerous wallet addresses.  Its aim is to spread awareness about the cryptocurrency project and to get more people trading in it when it lists on an exchange as an initial coin offering (ICO).

A “Rug Pull” is a term used in the crypto world to describe a fraud or a scam. The developers or founders of a project don’t fulfill their promises after receiving the desired funds. In simple words, the founders run away after an investment. This scam can occur with NFT projects as well as crypto currencies.

The term Alpha means obtaining an information that will help one beat the market. It is used both in NFT or crypto space. It could also sometimes mean obtaining classified or confidential information.

For a NFT or crypto project it is basically a game plan. The developers or founding teams has set for themselves a timeline of achievable steps. The key in NFT projects are roadmaps. It is important because it will help the investors know the plan that will be taken to help their NFT appreciate in value.

“Hold on (for) dear life” is the acronym for HODL. It is used as a reminder to hold onto assets regardless of downturns or bad news in crypto/ NFT space. Keeping an investment regardless of volatility is the simple meaning of HODL.

Almost all of us are familiar with this term which means “fear of missing out”. It refers to investors who think they might have missed the opportunity to invest in a project. Being aware of your emotional tendencies and carefully research a project before investing is the best way to avoid FOMO.

FUD is a term often used in the crypto world or NFT that means “fear, uncertainty, and doubt”. It is a tactic used to manipulate public opinion about specific cryptocurrencies or the crypto market in general by disseminating unactual, inaccurate, or misleading information.

Community is a term in the crypto space which is mainly used to refer to the holders of an NFT project. These communities provide an avenue where investors can share news, exchange ideas or opinions, or ask questions. They are usually formed and maintained via popular online messaging platforms.

It is a term used in the NFT or crypto space to describe an investment that is done with little research or in a hasty manner. The term “Ape In” became popular with the rise of Bored Ape Yacht Club which is one of the most successful NFT projects.

Sweeping The Floor is a term used in the NFT space which mainly refers to someone who is often a person from the founding team. They purchase the NFTs that are being listed for the lowest amount on the secondary market.

Paper Hands is a term which refers to someone who sells an asset early on. It is used in both Crypto space and NFT. It basically means someone who does not hodl. An example of a person with paperhoods is one who sells at the first sight of bad news.

To the moon is a term commonly used in crypto space. It is a term said by holders of a project who think a project or asset will exponentially increase in value.

The term burning refers to the removal of an asset from circulation.

This is everything about NGMI acronym. Hopefully you find it useful and you found what your looking for.

OGROCKET – A RIDE OF ONLINE ROCKET